Like a recluse groundhog,our infamous ghost president Father Leahy only ever comes out during special events , and most students wouldn’t even be able to recognize him if he blessed them in the flesh. The only way we can get a glimpse of the leader of our school is through his various official portraits littered around our campus. Despite all of them eerily looking like someone took the same picture of Father Leahy and put different backgrounds, we decided to rank these few pictures of Fr. Leahy that exist.

Ok, so this one comes in dead last because you can just tell he’s internally screaming.Is he trapped? Is someone keeping him against his will? A puppet priest? That smile is more of a grimace, and the picture is probably zoomed in to hide him clenching his fists while he waits to bolt. And the washed-out panel of stained glass in the background? No. Just no.  #notmypresident’sportrait 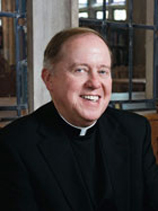 His smile feels authentic in this one, and not in the “haha, that joke wasn’t funny but I feel bad” kind of way. It’s still a torso shot, and with the all-black ensemble he kind of looks like a floating ghost head, but hey, it’s an improvement. However, what is it about him standing in front of windows? To prove he’s not a creature of darkness? The only version of this image that exists online is extremely small, and thus leads us to believe it was taken when he was new to the job. Full of life, full of love, not trapped somewhere on campus.

Now we get into the collection of what we like to call “middle school picture day” shots. The quarter turn, hands folded in front, not too much of a smile. Classic. Now, this one is freaky because he’s sitting in front of a cabinet that looks like Alcatraz for books. Why lock them up? What did they do to you? He just looks tired, almost as if every other photographer has asked him to do this same exact pose anytime he’s taken a picture.

Ok it’s official. Either every other photographer has asked him to do this same exact pose, or someone is cropping the same picture in front of different backgrounds. Look at this: same body position, same outfit… this one is even the same background with the creepy incarcerated novels, just minus ten years. Or plus ten years? He’s even wearing the same exact watch as in previous pictures. Does he age? Are we even sure he exists and isn’t just a robot from Westworld?

This is certainly a change in pace because he’s not in front of a window or book penitentiary! We’re proud of him, it must have taken a lot of willpower and self-talk to switch things up. Granted, the grey, shapeless column isn’t exactly what we call a beautiful landscape, but it’s different, which is more than we can say for the big man himself. But wait, is that a new collar?! No? Nevermind.

This is it, this is the best portrait Fr. Leahy has even taken in his entire life. Look at this masterpiece: first of all, the background is so pretty and colorful. Windows? Check! That green carpet that makes similar appearances in other pics? Done. A chair? Gotcha! By this point he has mattered the hand-folding pose, and is that…. Is that light I see in his eyes? Someone call St. Iggy because we have just witnessed a miracle.

With these basically identical images, you’ll now be able to recognize he who has supreme power whenever he walks around campus! Which is… well, never.