Every student is either blissfully unaware of or simply goes along with the fact that our school mascot is a literal blue demon. We all just go around pretending that’s a thing when it’s not a thing anywhere. We’ve already established how it’s super weird that the largest Catholic school in the nation has demons as their mascots, regardless if it provides a “fun” story for stressed and pissed off student tour guides to tell to parents who haven’t been on a college campus in 40 years. None of us have any school spirit, yet we fall head over heels in rapt lust for our blue, bipedal mascot. But what the hell is he, and how did we get here? Let’s invesdibsgate.

We didn’t always used to be the Blue Demons. We didn’t even always used to be called DePaul University. Back when the university was established in the super early 1900s, the whole place used to be called St. Vincent’s College. Enrollment at the time was at an all-time low (there were only like 70 students), but tuition prices were the same as they were today, at a comfortable, affordable, $1.3 million per quarter (you know, inflation, etc). 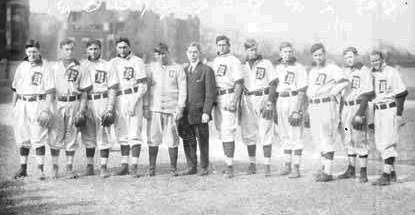 At the time, the DePaul uniforms were red and were more indicative of actual demons. When the college went through a rebranding makeover, they switched to the color blue to differentiate themselves from DePaul Academy, a now non-existent high school that blasphemed the good name of St. Vinny-D. The “Demons” part came from the sports teams being called the DePaul Men and then the D-Men. And then you can kind of follow the thread from there. C’mon DePaul, I know WWI wasn’t a super chill time, but you weren’t so busy that you couldn’t come up with a name for your team.

At the center of the Blue Demon craze sits DIBS, DePaulian fetishist first, mascot second. The de facto leader of this strange cult he embodies. DIBS is actually an acronym that stands for Demon in a Blue Suit, which technically implies that DIBS is a demon wearing a costume.

Before being named DIBS in 1999, the original mascot was called Billy the Blue Demon, which is just plain lazy. It’s like how pet owners name their animals “human” names cause it’s funnier, but I’m not going to get excited cheering on a mascot who sounds like he’s a middle school student that sticks gum in other people’s hair.

DIBS is brought to life by a number of students but all of their identities are anonymous, mostly for the safety of the costume. With the boatload of memes that seem to imply that DePaul has a large furry population, I don’t want to touch, what I imagine, is a very sticky DIBS.

Being a Blue Demon is a different matter though. I’m sure there’s a rigorous process to becoming a sports player for DePaul, and thus, an official Blue Demon. Thankfully, you don’t have to go through any of that. DePaul considers anyone who actually goes to a game a Blue Demon.

So unfortunately that doesn’t apply to anyone on campus. You can also just buy Blue Demon merch and you’ll appear like someone who knows something about the school they go to. Or you could always just donate a bunch of money to DePaul and become an honorary Blue Demon. It’ll take 78 years to pay off loans and to earn a large enough sum, but there are options aplenty, like this:

DePaul’s Vincentian values and Blue Demon mascot make no goddamn sense, but it works with how blue demons aren’t real, just like DePaul’s Catholic population. And for anyone who’s feeling especially in the mood, you can request DIBS to come to your event from the DePaul Athletics website.