Have you ever seen Jonathan the Husky on the way to class but he was just out of your reach and you missed out on the once-in-a-lifetime opportunity to pet him? Are you shy and nervous to pet him due to his celebrity status and beautifully intimidating coat? It’s okay, we understand. Jonathan is way too much of a good and famous boy for you. Here are 5 things you can pet instead, if you miss out on Jonathan.

Why pet the real, soft and furry Jonathan when you can settle for a rusty metal snoot! Instead of chasing Jonathan down from across the street to get a chance to just glance at him from behind the crowd too big to ever get around, you could pet his statue’s nose for good luck! Bring your family too, and you could take family pictures with the statue, and slo-mo videos of you just petting and hugging the statue as if it were your family pet. You could even convince students who don’t go here that the statue is, in fact, the real Jonathan.

Can’t seem to get a hold of good ol’ Johnny boy? That’s okay! Homer Babbidge has super artsy decoy Huskies, one beautifully painted to resemble Jonathan and another Husky decorated with pictures of therapy and emotional support dogs in honor of “Paws to Relax,” which is a program that exists during the peak of finals week. Stop for a quick pet of these fake puppers and a booping of their snoots if you really, really miss your dog or are in need of some TLC and affection during the late nights at Homer B. Not as good as Jonathan but still a quality smol bean experience. 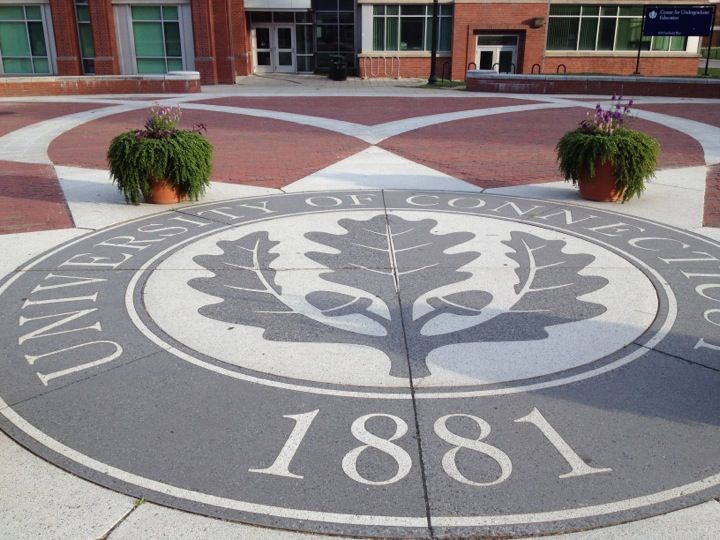 Looking for some bad luck? It is an old urban myth here at UConn that if you happen to walk on the seal on Fairfield Way that you will not graduate in four years. Softly pet and lay on the seal on the ground near ITE for an optimal college dropout or super senior experience. The most underrated and soft animal on campus is the seal TBH and this is a great way to get Jonathan to notice you, as this is a prime and busy location.

Recently, the roof of Gampel has been under construction. It is undergoing some major changes to ensure that it is the biggest titty on this campus. As you may know or observe, there are many construction men scaling the roof (titty) throughout the day. Instead of petting Jonathan (who is way too busy and famous for you and you will never get to pet him), you can softly pet and caress the Gampel Titty to leave an everlasting legacy at this school, surpassing the combined popularity and relevance of both Jonathan the Husky and Luke Gatti.

The plants at UConn’s greenhouses do not get as much love as they deserve, especially those special carnivorous plants such as the venus flytrap. These plants thrive in humid conditions and can be found in the sunniest parts of the greenhouse complex and could potentially make great pets and companions, unlike Jonathan the Husky, who is emotionally unavailable and already has an owner. Make a visit to one of UConn’s public greenhouses and pet a venus flytrap today!

And so Huskies, missing out on petting Jonathan isn’t too bad! There are so many other things, buildings, and real dogs on campus to pet when you are feeling down. Fluff those paws, sniff your way around campus, and bork like a true Husky and maybe Jonathan will finally notice you. But hey, if you actually managed to pet Jonathan at his 4th birthday celebration last week, we send you supportive good-boy pats.

Listen to Talk of Shame, a podcast about being young & dumb, hosted by 2 drunk girls from The Black Sheep, Mackenzie & Andrea. One can’t find her tampon, the other one’s laundry is probably on fire. Subscribe to Talk of Shame: